At the Annual Members' meeting in Spring of 2020, the membership of Women in Housing and Finance voted on changes and additions to the Board with the Board slate below. WHF is pleased to add four fantastic new Board Directors who start their first term in the 2020-2021 calendar year.

Re-election of Officers to 2nd term:

Re-election of Board Directors to 2nd term:

A few Board Directors have also termed off and stepped down this year. We are so grateful to you all for your years of service and look forward to seeing you at upcoming WHF events: 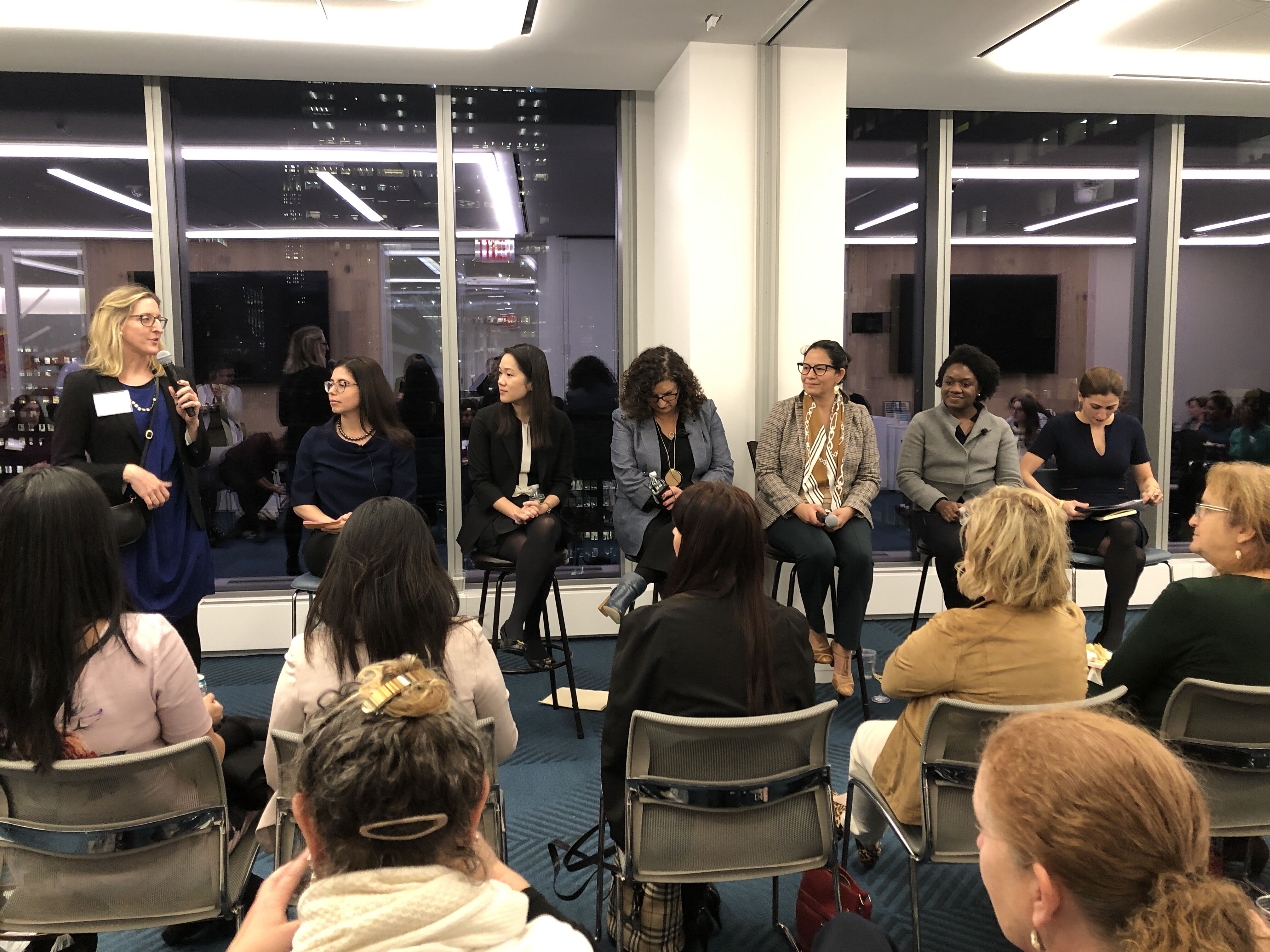 The annual Women in Housing and Finance (WHF) Fall Panel on Tuesday, November 12th featured a lively conversation among executive level leaders on the use of private funds in affordable housing development and restoration flowing from social impact investment initiatives.

One of the keys to the conversation was the definition of social impact investment. The origin of the investment movement was cited as the United Nations’ “ESG” framework and principles. ESG stands for Environment, Social and Governance investment, and takes into account these factors as well as the bottom line. How the investments are rated using ESG principles is specific to investor and advisor goals. It was also defined as funds that are not generated by the Low-Income Housing Tax Credit (LIHTC) program.

Each panelist works for an organization with specific thriving programs for interested investors. Panelists affirmed that there is strong institutional and family office interest in affordable housing funds and individual properties due to their risk adjusted return due to insulation from boom and bust real estate cycles. They also cited the ongoing shift in intergenerational wealth to women and to Millennials who are prioritizing ESG considerations.

The two-hour sold out panel discussion was moderated by Tatiana Gutierrez, Partner at Nixon Peabody, and held at Nixon Peabody’s new law office in midtown. It was also generously sponsored by Bronx Pro Group, and organized by WHF-NY Board members Emily Kurtz of RiseBoro, and Samantha Magistro of Bronx Pro Group.

Following the discussion, attendees had the opportunity to network with each other and with the executive level speakers.

What we've been up to this summer!

The 2018 WHF-NY Annual Summer Tour: Thursday, July 19, 2018. The skies were blue, the temperature warm and clear with a light breeze – perfect for touring the first completed buildings of the Essex Crossing project starting at 175 Delancey Street. WHF members and guests saw this property, The Rollins building, and a couple of impressive foundations from the Rollins rooftop, as well as a visual presentation from L & M Development Director Isaac Henerson and L & M Project Manager Jayda Shanks.

The tour was organized by WHF-NY Board Members MyPhuong Chung and Tatiana Pena and was sold out. MyPhoung was involved in the site both as an architect, and as a member of the Community Board. The Community Board had regular meetings with the developer and contributed to neighborhood success including keeping the footprint of the commercial offerings small in size.

Some cool facts: There are a total of 9 sites that make up the project. It includes one million feet of commercial real estate – both office and retail. There are 560 affordable and 530 market rent apartment homes. Of those affordable there is a mix of income requirements, and it includes 100 senior units. There are also market rate and subsidized apartments available for ownership. It is projected to cost a total of $1.5 billion and the full construction process, when finished, is expected to span a decade. L&M has received numerous accolades for bringing in and managing a host of partners and subcontractors.

Retailers who have signed on include Target, Regal Cinemas, and Trader Joe's. The commercial mix also includes NYU Langone, and ICP- the International School of Photography, which is moving its school and museum to Essex Crossing.

Some very New York history – the tenements that made up this area were demolished in 1967 and the empty lots languished for nearly five decades. Among those who have new homes in the project are 30 families that were displaced when the buildings came down.

The Summer Tour is an annual sold-out event, giving WHF members an intimate tour of newly built or recently completed projects. Past tours include the Cornell Tech Campus on Roosevelt Island, a scenic tour of the new Governor’s Island improvements, and a walking tour of several new developments in the new BAM Cultural District in Brooklyn.

At the May 22nd Annual Meeting, the WHF members present and those who provided votes via email in advance, elected the following:

Re-elected board members for a second term:

Also note this year the Board voted to give Alison Novak, Principal at Hudson Companies and recent WHF Board President, the honorable title of Vice Chair of the board of WHF. Alison joins an esteemed list of past board presidents for her tremendous contributions and impact to the organization and her ongoing service to WHF.

WHF is now accepting nominations for board membership for the 2018-2019 and 2019-2020 fiscal years. Both self-nominations and nominations by another WHF member are acceptable.  Please send all board nominations, including resume of nominee, either directly to me ([email protected]) or a current board member for consideration.  Elections will take place at our upcoming Annual Members’ Dinner on May 22nd. You do not need to be present at the dinner to be eligible for consideration, but it’s a lovely event so if you can, please attend.  The WHF board will send out the slate of board nominees for review by Monday, May 7th.

At the May 23rd Annual Meeting, the WHF members present and those who provided votes via email in advance, elected the following:

Re-elected board members for a new term:

Note: Liz Eisenberg transitioned from an Officer role to a Board Member, which did not require a vote.

Your login is your email address and likely the one at which you receive WHF emails.

Once you have successfully set a new password, you should not have to do this again.

If you have tried the above and still have difficulty, please contact us!

A few notes for you about the new website:

1. You will likely need to reset your password. Just follow the "forgot your password" prompts. You should be able to get a new password set up on your own without trouble but if you run into difficulty, reach out to us via our Contact page.

2. If you aren't seeing emails from us or they are ending up in a spam filter, please add 'info [at] whfny [dot] emailnb [dot] com' to your list of approved senders.

3. When purchasing a ticket, please make sure you have selected the correct number of tickets that you want to buy. (Yes, you can buy 40 tickets to the members dinner but is that how many you really want?)

We are so glad to have a classy new website -- and one that we can update easily to share news.

Let us know if you encounter kinks so we can continue to improve our operations.