WHF Fall Panel Recap; Moving Towards Racial Equity and Inclusion in your Organization and Beyond

On November 16th, 2020, Women in Housing and Finance’s New York Chapter (WHF) hosted a virtual fall panel on an important topic for 2020 – Moving towards Racial Equity and Inclusion in your Organization and Beyond. Moderated by Brittany S. Hale, the founder, CEO, and Chief Culture Architect of BND Consulting Group, the panel featured prominent women in the affordable housing and community development sector and discussed how each speaker approached racial equity and inclusion within her organization – both externally, as part of her organization’s mission, and internally, as part of her organization’s culture. Over 130 participants registered for the program. 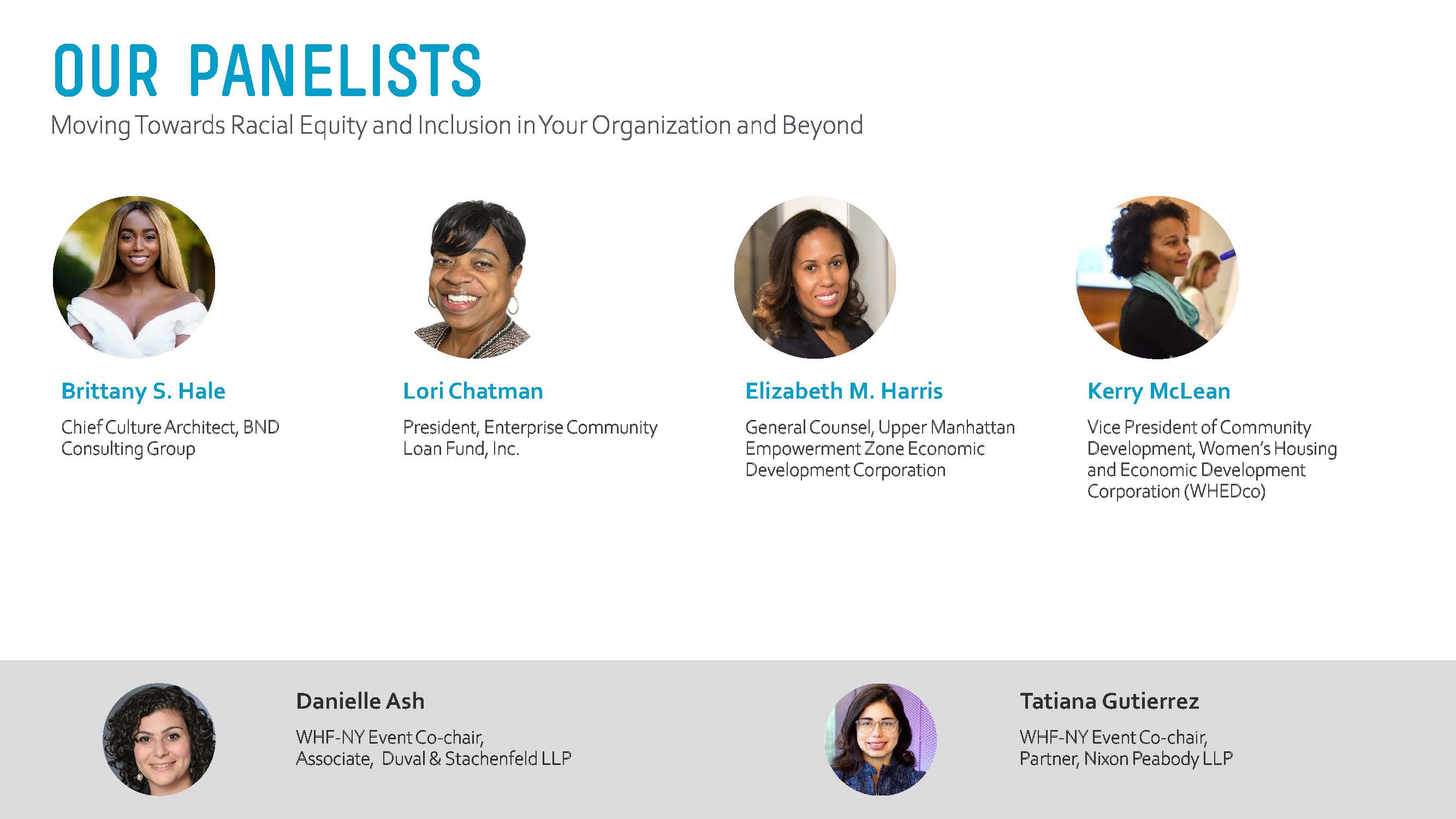 Ms. Chatman, who leads a 45-person team and is responsible for raising and deploying capital through large-scale debt funds and tax advantaged equity investments, started off the panel by describing how Enterprise’s mission to provide affordable housing intersects with building racial equity. She and the other panelists agreed that access to safe, affordable housing was a cornerstone of racial equity – but also that equal access to educational resources and capital were critical to building opportunity for Black and Brown communities. While Enterprise invests in communities nationwide, both WHEDco and UMEZ have missions focused on serving specific communities within New York City (i.e., WHEDco serves the South Bronx and UMEZ serves Upper Manhattan). Ms. Harris described UMEZ’s work in providing small business grants and micro-loans to new entrepreneurs and Ms. McLean considered some of WHEDco’s COVID-19 programming, including in addressing food insecurity and access to childcare and technology. Ms. McLean, who has more than 20 years’ experience in community development and directs neighborhood planning, commercial revitalization, and creative place-affirming initiatives at WHEDco, also discussed the significance of centering empowerment in addressing racial equity among those excluded. Such empowerment is addressed in many forms at WHEDco, including civic engagement, economic opportunity, education, and even by ensuring the organization’s staff is reflective of the diverse community it serves.

In addressing how each organization measures progress in addressing racial equity and inclusion, each panelist focused on the importance of intentionality in being anti-racist and seeking input from the communities they serve, but stressed that finding the right metrics takes time and is a constantly evolving process. Ms. Chatman described how Enterprise continues to examine its own role in solving the capital challenge for Black and Brown real estate developers – for example, by scrutinizing how Enterprise’s own requirements can limit or enhance each developer’s ability to access institutional capital and build meaningful returns. Ms. Harris, who has counseled her organization on the creation of a predevelopment loan fund for emerging developers and the redesign of its cultural investment strategy, explained how UMEZ collects data from a variety of sources, including publicly-accessible data from local community boards and from UMEZ’s direct borrowers to better understand which community members benefit from UMEZ’s resources and programming. Through this research, UMEZ sought to increase its outreach to the predominantly Black and Latinx community of East Harlem and, since then, has targeted outreach to that community and created a micro-lending program that would better address the needs of East Harlem businesses, like food carts and bodegas.

After considering some of the hurdles that each panelist faced externally in building inclusive programming, Ms. Hale moved the discussion inward. She asked each panelist to consider how her organization creates inclusive spaces within the office and addresses racial equity in the context of hiring, advancement, and leadership.

Ms. Chatman discussed how her direct team at Enterprise is one of the most diverse within the organization – not necessarily because she makes an intentional effort to find diverse candidates, but simply because, as a woman of color, she naturally reaches out to more diverse qualified candidates when a role needs to be filled. In a lot of companies, particularly non-profits, representation is often limited because of leadership’s lack of access or knowledge of diverse candidates – if you need someone quickly to fill a role, you automatically go to those in your network and your network tends to look like you. So, if leadership is not diverse, their networks are not diverse and your organization will have a harder time building diversity within its ranks. In addition, Ms. Chatman stressed her willingness to see potential and not having an expectation that each candidate she hires has the exact experience or skillset for the job, instead trusting that a candidate’s breadth of relevant experience combined with her team’s skill in training new hires would help the candidate succeed.

Both Ms. McLean and Ms. Harris work in organizations with staff who are predominantly Black, Brown, and female, but they each stressed how that representation, in and of itself, does not cover every blind spot when it comes to inclusiveness – particularly on each organization’s Board and executive team. Ms. Harris, in particular, noted how important the younger members of her organization have been in identifying blind spots and asking the right questions. All the panelists agreed that intergenerational communication and involvement from more junior team members has been critical in crafting and implementing racial equity and inclusion programming (both within and outside the organization).

On a more personal note, Ms. Hale asked the panelists to share relevant experiences of being “othered” or pushed aside because of their race, gender or culture – what she called “The Moment”. Ms. Chatman and Ms. Harris each acknowledged how difficult it was early in their careers to recognize and address these micro-aggressions, especially from other people of color. “Racism does not respect intelligence,” Ms. Harris concluded. Ms. McLean, who is  an immigrant,  emphasized the importance of knowing when to raise concerns to management  so they can address discriminatory behavior head-on. “If it happens in the workplace, it’s no longer a personal issue, it’s a personnel issue and the organization needs to handle it,” she explained.

The panelists then tackled several questions from the audience.

The first question was about the role that architecture and design can play in creating inclusive spaces. Ms. Chatman discussed Enterprise’s Rose Fellowship, which seeks to engage architects and designers with the communities in which their projects are realized to better address community needs – for example, by crafting specialized spaces for certain religious and cultural customs. Ms. McLean discussed “Yes, Loitering”, a recent WHEDco Teen Program project collaboration with an architect/participatory designer, which aimed to explore the use of public space in the policing of teenagers in Black and Brown communities.

Another audience member asked whether any of the panelists, in their work on racial equity and inclusion, coordinated with or reached out to other organizations beyond their own. Ms. McLean pointed to WHEDco’s membership in several organizations locally and citywide, and engagement with its own funders, vendors and community partners to constantly assess the value of their programming and deepenen their approach to tackling systemic issues of racism and inequity.

Of course, on everyone’s mind, is looking ahead to a post-COVID world – with more flexibility to work from home, will learning and connectivity suffer and will this have a disproportionate impact on young minority professionals? Ms. Harris and Ms. Chatman commiserated about their experiences with new hires during the pandemic – noting how difficult training has been in a virtual setting. Ms. Harris specifically lamented how Zoom is just not sufficient for picking up subtle facial expressions and social cues from colleagues and supervisors, which can hamper employees’ ability to gain cultural competency.

Finally, Ms. Hale ended the program by asking the panelists to advise the audience about taking next steps – what can attendees do Monday morning to get their organizations focused on these issues? Ms. McLean emphasized the need to read and become grounded in a full, correct telling of U.S. history, and listen – to people of color, other employees, and the community your organization serves. Ms. Harris suggested creating the space for the conversation, especially among junior members of the team. She explained that an open forum is critical to holding leadership accountable. Ms. Chatman described that, as an organization, Enterprise firmly believes that everyone can lead from their seat, wherever that seat is; but she cautioned the audience to be thoughtful about how these conversations might be perceived by leadership. “Be thoughtful and mindful about your organization and its culture … and it doesn’t mean you need to accept it or stay with it, but be thoughtful about how you bring [these conversations] to bear depending on your seat,” she concluded.